Answers to Kids' Questions
about Santa 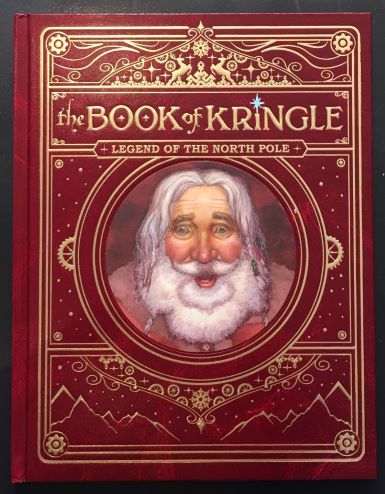 How can 'Santa' get all over the world in just one night?

The short answer: Google Maps and stardust propulsion.
The long answer: Santa has more than 24 hours due to the earth's tilt and all the time zones-when New Yorkers are setting out the cookies, children in Australia have already opened all their packages.

We don't have a chimney. How will he get in?
He'll walk right through the front door! It's that simple. Sometimes families with a chimney make a fire and Santa has to use the front door then, too, because-well. ouch. (Santa's also been known to skip the chimney if he's eaten too many cookies.) Here's an idea: Leave him a key! Mr. Claus can let himself in with a special key only he can use. Have your child make your own using any old key (add sequins for festiveness), ribbon, and paper. Have him write out: "Dear Santa, We don't have a chimney as you can plainly see, but we still want you to visit, so here is your magic key!" Tie the note to the key, and loop the ribbon around the front doorknob. Crisis averted!
How does Santa really know if kids have been bad or good?
Santa has eyes everywhere. Elves the one on your shelf and the ones at the North Pole are always watching, but mommies and daddies, teachers, babysitters, and bus drivers are all part of Team Santa too. They report to the man in red on a daily basis, which means, just to be safe, you should probably be on your best behavior everywhere you go, all the time, no matter what.


If my elf doesn't move every night, does that mean he didn't report to Santa Claus?
Your elf does not have to be there in person to tell the boss you called your sister a not nice name. Elves can communicate with headquarters over special elf waves. Sometimes there's a blizzard in the North Pole or air traffic that keeps him grounded, and sometimes he's just too darn tried to move a little elf muscle. Here's the thing about elves on shelves: Some just have more time on their hands than others.
Why does Santa have the same wrapping paper as my mom?
Every once in a while, Santa reaches into his sack to pull out a present and discovers it's not wrapped. This means that some elf didn't do his job and will probably be demoted to cleaning the reindeer pen on December 26, but in the meantime, the big guy keeps his cool and goes into your mom's wrapping-paper stash to borrow just a little to wrap the gift. Team Santa, FTW!

Is the mall Santa the REAL Santa?

Here's the scoop: Santa is still at the North Pole making his list and checking it twice. He couldn't possibly sit outside Anthropologie all day smiling and ho-ho-ho-in. So who is that jolly old guy whose lap you sit on every December? One of Santa's many helper Santa's, that's who. You should still take your visit seriously, though, because the helper Santa reports back. The beard, the belly, the long line-it can all be overwhelming. Before you hit the mall, check out Facebook photos of your friends' kids meeting Santa, or dig up yours from previous years to reacquaint yourselves with the routine. And don't go straight to the back of the line-walk by Santa first to take a peek. Try to catch his eye so you can smile and wave and build excitement for your turn.

And don't forget to ask nicely! Good manners should be a year-round goal, but it's especially important during the holiday season. Urge your kid to introduce herself to Santa, tell the big man how much she loved what he brought last year, ask about Mrs. Claus-and of course, share her politely worded wish list.

How come he doesn't get a stomachache from eating all the cookies and milk?

Um, have you seen the guy's belly?

**Answers that will also work for any of these questions: "Magic," "Go ask your dad" or, in a pinch, "Look, kids, a reindeer!"

Fauci says Santa Claus has 'innate immunity,' won't be spreading COVID-19 to anyone this Christmas

Fauci says Santa Claus has 'innate immunity,' won't be spreading COVID-19 to anyone this Christmas!

Santa Claus is coming to town. And he's not bringing COVID-19.

"Santa is exempt from this because Santa, of all the good qualities, has a lot of good innate immunity," Fauci told USA TODAY this week.

It should come as no surprise. As children already know, Santa is superhuman. He flies around the world in one night, delivers millions of toys and eats his weight in cookies.

But with millions of Americans already sick with COVID-19, children have been worried about Santa, especially this Christmas Eve when he visits millions of homes. And there's no denying that Santa, because he is older and overweight, would at first glance appear to be at higher risk of developing severe disease from COVID-19.

Fauci is telling kids not to worry, though. "Santa is not going to be spreading any infections to anybody," he said. Before visiting family for the holidays: Fauci urges Americans to 'think twice' about travel plans