The Real Santa Claus!
Christmas Comes But Once A Year
Written by Phelps, James 2003 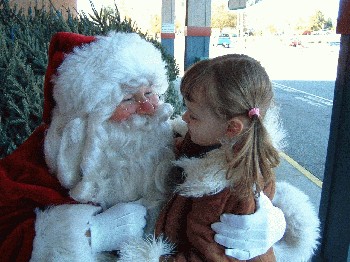 (The Santa Claus behind Project Santa was admired by many people that knew him for his outstanding works in the community and other parts of the World. I just called him Santa my mentor a man who gave of himself.)

Santa Claus lived in Garner, North Carolina born Oct. 12, 1935 and died June 16, 2013 at Rex Hospital after an extended illness. Santa was active in volunteer work, helping the unprivileged children, the elderly, handicapped and others in need. He founded "Project Santa" and played Santa to hundreds of children and to the elderly in nursing homes. Many received toys and gifts that otherwise would not have enjoyed Christmas. His compassion extended to the Hugo storm victims, the homeless, giving radios to those in nursing homes and sending care packages to Desert Storm soldiers. Some of the acknowledgements of appreciation that he received were from governors of NC, Human Resources Dept. of City of Raleigh, former Raleigh Mayor Upchurch, Cities of Raleigh, NC, Hamlet, NC and McClellanville, SC and many individual letters of thanks. After his health declined, he rode his motorized wheelchair around Forest Hills in Garner delivering fruits and candies and sometimes his delicious home-made banana puddings to residents of local rest homes.

Santa had a heart of gold with love in his heart and a red suit that he cherished and prayed for, asking our heavenly father to help obtain and succeed in his long life dream to contribute and help his fellow man and to share the Christmas joy in his heart! A man known as Santa Claus to the end.

Christmas Comes But Once A Year, Written by Phelps, J

It makes me so happy, I could stand up
And cheer!
To dress in my Santa Suit so dear.

They rode through a war with Robert E. Lee.
Now they serve a big man in red: Me!

I'm a friend of children and the elderly;
Going to rest homes and making my rounds,
I spend my days visiting far and around.

Shaking their hands and chatting with all;
Giving out presents and having a ball!

It's worth the trip to make their day,
Getting hugs and making friends along the way.

Everyone is so happy to see Santa some more,
Sad faces to smiles. Even from the poor.

Many times I tell them I love them true
With the hope to make them feel less blue.

Some have tears of loneliness;
They're alone, and feel so bad,
Their families have forgot them,
And that is so sad.

I tell them I love them and
I wish them the best.
I wish them a Merry Christmas
And be happy at last.

Because the day is so near
That we all will see,
That special child that was born
to save you and me.

Santa is on his way
In his trusty old sleigh
To carry the goodies and toys
To all good little Girls and Boys.

Tonight is the night
For that jolly old man
To make all his rounds
To all cities and towns.

Just one more time,
And Santa will take her toys.
And give them to Good Little Girls and boys.

By James Phelps
For his 3 year old great niece.
She asked him to write a poem for her.