How The Grinch Stole Christmas
by: Dr. Seuss & All About Dr. Seuss

Every Who Down in Who-ville Liked Christmas a lot...

But the Grinch, Who lived just North of Who-ville, Did NOT!

The Grinch hated Christmas! The whole Christmas season! Now, please don't ask why. No one quite knows the reason. It could be his head wasn't screwed on just right. It could be, perhaps, that his shoes were too tight. But I think that the most likely reason of all May have been that his heart was two sizes too small.

But, Whatever the reason, His heart or his shoes, He stood there on Christmas Eve, hating the Whos, Staring down from his cave with a sour, Grinchy frown At the warm lighted windows below in their town. For he knew every Who down in Who-ville beneath Was busy now, hanging a mistletoe wreath.

"And they're hanging their stockings!" he snarled with a sneer. "Tomorrow is Christmas! It's practically here!" Then he growled, with his Grinch fingers nervously drumming, "I MUST find some way to stop Christmas from coming!"

And THEN They'd do something He liked least of all! Every Who down in Who-ville, the tall and the small, Would stand close together, with Christmas bells ringing. They'd stand hand-in-hand. And the Whos would start singing!

Then he got an idea! An awful idea! THE GRINCH GOT A WONDERFUL, AWFUL IDEA! "I know just what to do!" The Grinch laughed in his throat. And he made a quick Santy Claus hat and a coat. And he chuckled, and clucked, "What a great Grinchy trick! "With this coat and this hat, I look just like Saint Nick!"

"All I need is a reindeer..." The Grinch looked around. But, since reindeer are scarce, there was none to be found. Did that stop the old Grinch...? No! The Grinch simply said, "If I can't find a reindeer, I'll make one instead!" So he called his dog Max. Then he took some red thread And he tied a big horn on the top of his head.

THEN He loaded some bags And some old empty sacks On a ramshackle sleigh And he hitched up old Max.

Then the Grinch said, "Giddap!" And the sleigh started down Toward the homes where the Whos Lay a-snooze in their town.

All their windows were dark. Quiet snow filled the air. All the Whos were all dreaming sweet dreams without care When he came to the first little house on the square. "This is stop number one," the old Grinchy Claus hissed And he climbed to the roof, empty bags in his fist.

Then he slid down the chimney. A rather tight pinch. But, if Santa could do it, then so could the Grinch. He got stuck only once, for a moment or two. Then he stuck his head out of the fireplace flue Where the little Who stockings all hung in a row. "These stockings," he grinned, "are the first things to go!"

Then he slithered and slunk, with a smile most unpleasant, Around the whole room, and he took every present! Pop guns! And bicycles! Roller skates! Drums! Checkerboards! Tricycles! Popcorn! And plums! And he stuffed them in bags. Then the Grinch, very nimbly, Stuffed all the bags, one by one, up the chimbley!

Then he stuffed all the food up the chimney with glee. "And NOW!" grinned the Grinch, "I will stuff up the tree!"

And the Grinch grabbed the tree, and he started to shove When he heard a small sound like the coo of a dove. He turned around fast, and he saw a small Who! Little Cindy-Lou Who, who was not more than two.

The Grinch had been caught by this tiny >Who daughter Who'd got out of bed for a cup of cold water. She stared at the Grinch and said, "Santy Claus, why, "Why are you taking our Christmas tree? WHY?"

But, you know, that old Grinch was so smart and so slick He thought up a lie, and he thought it up quick! "Why, my sweet little tot," the fake Santy Claus lied, "There's a light on this tree that won't light on one side. "So I'm taking it home to my workshop, my dear. "I'll fix it up there. Then I'll bring it back here."

And his fib fooled the child. Then he patted her head And he got her a drink and he sent her to bed. And when Cindy-Lou Who went to bed with her cup, HE went to the chimney and stuffed the tree up!

Then the last thing he took Was the log for their fire! Then he went up the chimney, himself, the old liar. On their walls he left nothing but hooks, and some wire.

And the one speck of food That he left in the house Was a crumb that was even too small for a mouse.

Then He did the same thing To the other Whos' houses

Leaving crumbs Much too small For the other Whos' mouses!

Three thousand feet up! Up the side of Mount Crumpit, He rode with his load to the tiptop to dump it! "Pooh-pooh to the Whos!" he was grinch-ish-ly humming. "They're finding out now that no Christmas is coming! "They're just waking up! I know just what they'll do! "Their mouths will hang open a minute or two "The the Whos down in Who-ville will all cry BOO-HOO!"

"That's a noise," grinned the Grinch, "That I simply MUST hear!" So he paused. And the Grinch put his hand to his ear. And he did hear a sound rising over the snow. It started in low. Then it started to grow...

But the sound wasn't sad! Why, this sound sounded merry! It couldn't be so! But it WAS merry! VERY!

He stared down at Who-ville! The Grinch popped his eyes! Then he shook! What he saw was a shocking surprise!

Every Who down in Who-ville, the tall and the small, Was singing! Without any presents at all! He HADN'T stopped Christmas from coming! IT CAME! Somehow or other, it came just the same!

And what happened then...? Well...in Who-ville they say That the Grinch's small heart Grew three sizes that day! And the minute his heart didn't feel quite so tight, He whizzed with his load through the bright morning light And he brought back the toys! And the food for the feast!

The Grinch carved the roast beast! 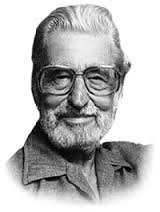 "OH, THE PLACES YOU'LL GO!
THERE IS FUN TO BE DONE! THERE ARE
POINTS TO BE SCORED. THERE ARE GAMES TO BE WON."
From: Oh, The Places You'll Go!

Theodor Seuss Geisel, better known to the world as the beloved Dr. Seuss, was born in 1904 on Howard Street in Springfield, Massachusetts. Ted's father, Theodor Robert, and grandfather were brewmasters in the city. His mother, Henrietta Seuss Geisel, often soothed her children to sleep by "chanting" rhymes remembered from her youth. Ted credited his mother with both his ability and desire to create the rhymes for which he became so well known.

Although the Geisels enjoyed great financial success for many years, the onset of World War I and Prohibition presented both financial and social challenges for the German immigrants. Nonetheless, the family persevered and again prospered, providing Ted and his sister, Marnie, with happy childhoods.

The influence of Ted's memories of Springfield can be seen throughout his work. Drawings of Horton the Elephant meandering along streams in the Jungle of Nool, for example, mirror the watercourses in Springfield's Forest Park from the period. The fanciful truck driven by Sylvester McMonkey McBean in The Sneetches could well be the Knox tractor that young Ted saw on the streets of Springfield. In addition to its name, Ted's first children's book, And To Think That I Saw It On Mulberry Street, is filled with Springfield imagery, including a look-alike of Mayor Fordis Parker on the reviewing stand, and police officers riding red motorcycles, the traditional color of Springfield's famed Indian Motocycles.

Ted left Springfield as a teenager to attend Dartmouth College, where he became editor-in-chief of the Jack-O-Lantern, Dartmouth's humor magazine. Although his tenure as editor ended prematurely when Ted and his friends were caught throwing a drinking party, which was against the prohibition laws and school policy, he continued to contribute to the magazine, signing his work "Seuss." This is the first record of

the "Seuss" pseudonym, which was both Ted's middle name and his mother's maiden name.

To please his father, who wanted him to be a college professor, Ted went on to Oxford University in England after graduation. However, his academic studies bored him, and he decided to tour Europe instead. Oxford did provide him the opportunity to meet a classmate, Helen Palmer, who not only became his first wife, but also a children's author and book editor.

After returning to the United States, Ted began to pursue a career as a cartoonist. The Saturday Evening Post and other publications published some of his early pieces, but the bulk of Ted's activity during his early career was devoted to creating advertising campaigns for Standard Oil, which he did for more than 15 years.

As World War II approached, Ted's focus shifted, and he began contributing weekly political cartoons to PM magazine, a liberal publication. Too old for the draft, but wanting to contribute to the war effort, Ted served with Frank Capra's Signal Corps (U.S. Army) making training movies. It was here that he was introduced to the art of animation and developed a series of animated training films featuring a trainee called Private Snafu.

While Ted was continuing to contribute to Life, Vanity Fair, Judge and other magazines, Viking Press offered him a contract to illustrate a collection of children's sayings called Boners. Although the book was not a commercial success, the illustrations received great reviews, providing Ted with his first "big break" into children's literature. Getting the first book that he both wrote and illustrated, And to Think That I Saw It on Mulberry Street, published, however, required a great degree of persistence - it was rejected 27 times before being published by Vanguard Press.

After Ted's first wife died in 1967, Ted married an old friend, Audrey Stone Geisel, who not only influenced his later books, but now guards his legacy as the president of Dr. Seuss Enterprises.

At the time of his death on September 24, 1991, Ted had written and illustrated 44 children's books, including such all-time favorites as Green Eggs and Ham, Oh, the Places You'll Go, Fox in Socks, and How the Grinch Stole Christmas. His books had been translated into more than 15 languages. Over 200 million copies had found their way into homes and hearts around the world.

Besides the books, his works have provided the source for eleven children's television specials, a Broadway musical and a feature-length motion picture. Other major motion pictures are on the way.