Just type your message to Santa Claus in the box, and read his answers below it:
Santa loves to chat! 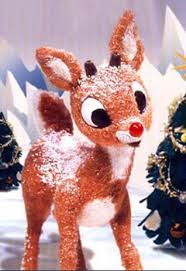 For most of us, "Rudolph the Red-Nosed Reindeer" has always been a part of our Christmas celebrations. Rudolph is definitely a twentieth century creation, as he is one of the few legends that can be traced to a specific date and person.

In 1939, "Rudolph the Red-Nosed Reindeer" was created for Montgomery Ward Department Stores by copywriter Robert L. May. At the request of his employer, May came up with a poem about a misfit reindeer that the store could use as a promotional piece during the holiday season.

May patterned his story after The Ugly Duckling, deciding on an underdog reindeer with a red nose. The story was written in verse and May's four year old daughter loved it. His boss wasn't as sure and he was worried about a story featuring a red nose -- an image often associated with drinking. But a friend of May's from the art department went to Lincoln Park Zoo and sketched some reindeer with red noses. May's boss was pleased and the story was printed.

By the end of 1946, over six million copies of the story had been handed out to eager shoppers. In 1947, May obtained a copyright for "Rudolph the Red-Nosed Reindeer" and it was printed commercially. That year a nine minute cartoon was produced and shown in theatres and Rudolph's popularity soared.

May's brother-in-law was songwriter Johnny Marks and he developed the lyrics and melody for the tune "Rudolph the Red-Nosed Reindeer." In 1949, Gene Autry recorded it and two million copies were sold. It went on to become one of the most popular Christmas tunes of all times. In 1964, a program about Rudolph, narrated by Burl Ives, was produced for television and remains popular today.