The American version of St.Nicholas, originally from Dutch Sint(e) Klaas. The Dutch settlers in New Amsterdam (New York) brought his cult to America. This Santa has given the current myth its visual form: merry old man with red/white clothes, eight flying reindeers, living on or near North Pole, filling socks with presents, arriving through the chimney. The most important single source for Santa was the Christmas poem of Clement Clarke Moore from year 1823 which was transmuted to image by Thomas Nast. Actually the cult of Santa Claus incorporates many traditions Christian and pagan : Old Catholic, Scandinavian, Dutch, German, English. Sadly, its main feature nowadays is commercialism. 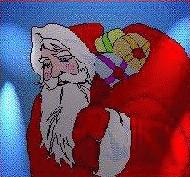 In Greek, Hagios Nikolaos, Bishop of Myra (in the present day Turkey), died about AD 350. Also known as Nicholas of Myra, Santa Claus or Santa in America.Countless of legends (no documents exist) are told about this man within both Western and Eastern Churches. He was born in the city of Patara, and travelled to Palestine and Egypt when young. He was imprisoned during persecutions of the Emperor Diocletian but released later by Emperor Constantine. He attended the first council of Nicaea in 325.

His fame spread rapidly in Middle Ages and thousands of churches are dedicated to him. He has been the patron saint of Russia, Moscow, Greece, children, sailors, prisoners, bakers, pawnbrokers, shopkeepers and wolves. His gift-giving role in Christmas rites probably follows from his fame as the friend of children. The story also tells that he used to give anonymous donations of gold coins to persons in need. His cult spread in Europe and Christmas presents were distributed in December 6th when the pageant of St.Nicholas took place. In many countries this day is still the day of Christmas gift-giving, although there is a mounting pressure everywhere to conform to the international custom of 24th/25th December. The relics of St.Nicholas are in the basilica of St. Nicola, in Bari, Italy (they were stolen from Myra in 1087 AD). For this reason he is sometimes known as St.Nicholas of Bari.

Generally a bearded old man in fur costume who appears in Yuletide and gives presents. Incorporates many traditions from different European countries and also newer American customs. The characteristics can be divided roughly into three groups: Those with traditional religious significance, those with trad but pagan origin and those needed for the plot only (logical fill-ins for the continuity of the story). Main sources:

Gifts: from St.Nicholas and the Magi (The three wise men from Orient), from pagan (Roman) Saturnalia custom.

Beard: St. Nicholas is traditionally imaged as bearded. Furthermore the Magi are bearded, being Persian priests. A traditional feature. The beard is white because the man is old.

Costume: The general form of the cloak probably derives from St.Nicholas, although the traditional costumes of the three Magi also may have contributed. The fur linings probably are logical add-on to fit the Northern Myth. In Finland Father Christmas may use true fur coat.

Reindeer: Cute creatures and Santa must use some form of transport. If He comes from North, so why not reindeers, who can be saddled with various fabulous names as well. An American add-on to the story.

The sock The repository for presents. A logical add-on.

The chimney In Scandinavia and Germany Santa comes in in 24th December, knocking the door like normal people. In England and America the visit is secret and thus the entrance must be special: the chimney.

North Pole: the supposed dwelling place of the American Father Christmas. No clear significance of any kind. Probably connected with the general "Northern exposure" of the American Christmas lore. The fact that Chistmas is pronouncedly Winter's festivity may contribute: North Pole is Winter doubled.

Cap: Probably from the bishop's mitre of St.Nicholas. Curiously enough the mitre resembles and possibly derives from the headgear of old Magi (mages, Persian priests. the other Christmas present-givers). The Phrygian headgear of French Revolution fame might be one influence. 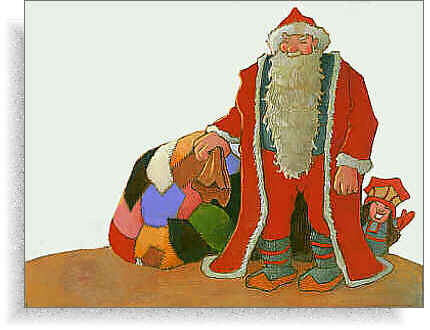 The name of Father Christmas in Finland. Literally: Yule Buck. Old pagan traditions lived on in Finland and never faded but got gradually a Christian flavor (elsewhere in Europe, too). The shortest days of the year are in December and pagan peoples used to have big festivities to ward of evil spirits. In Finland these spirits of darkness wore goat skins and horns. In the beginning this creature didn't give presents but demanded them, not to cause havoc. The Christmas Goat used to frighten the kids and was in every way very loathsome.

It is unclear how exactly this personality was transformed into the benevolent Father Christmas but nowadays the remaining feature is the name only. The process was probably a continuous amalgamation of many old folk customs and beliefs from varied sources. One can speak of a Christmas pageant tradition consisting of many personages with roles partly Christian, partly pagan: A white-bearded saint, the Devil, demons, house gnomes, whatnot. Nowadays the Joulupukki of Finland resembles the American Santa Claus.

The popular radio programs from the year 1927 onwards probably had great influence in formatting the concept with Santa-like costume, reindeers and Korvatunturi (Mount Ear, near Polar Circle) as its dwelling place. Because there really are reindeers in Finland (sadly, part of our agricultural husbandry) and we are living up North, the popular American cult took root in Finland very fast. Maybe the Joulupukki is a little bit more fearsome than Santa Claus, though. Finland is one of the few countries where kids customarily do see Father Christmas in the act of delivering the presents (a hired Santa or Grandpa) and probably the only one where the Saint asks the kids if they did behave during the year.

Many writers have been instrumental in designing the features of Christmas. One of the most influential was Moore whose poem "A Visit from St.Nicholas" painted the portrait of an American Santa Claus:

Thomas Nast the painter got his inspiration from Moore's poem. Thereafter no one could prevent the inevitable triumph of Moore's Santa. 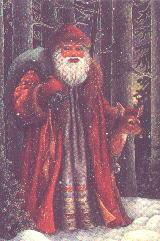 A newspaper artist who painted in 1870 the definitive first portrait of Santa Claus.