Now in the sixth month the angel Gabriel was sent by God to the city of Galilee named Nazareth, to a virgin betrothed to a man whose name was Joseph, of the House of David. The virgin's name was Mary. And having come in, 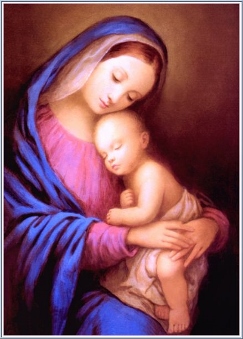 the angel said to her, "Rejoice, highly favored one, the Lord is with you; blessed are you among women!" But when she saw him, she was troubled at his saying, and considered what manner of greeting this was. Then the angel said to her, "Do not be afraid, Mary, for you have found favor with God. And behold you will conceive in your womb and bring forth a Son and you shall call His name Jesus. He will be great, and will be called the Son of the Highest; and the Lord God will give Him the throne of His father David. And He will reign over the house of Jacob forever, and of His Kingdom there will be no end."

Then Mary said to the angel, "How can this be, since I do not know a man?"

And the angel answered and said unto her, "The Holy Spirit will come upon you , and the power of the Highest will overshadow you; therefore, also, the Holy One who is to be born will be called the Son of God."

Then Mary said, "Behold the maidservant of the Lord! Let it be to me according to your word." And the angel departed from her.

Now the birth of Jesus Christ was as follows: After his mother Mary was betrothed to Joseph, before they came together, she was found with child of the Holy Spirit. Then Joseph her husband, being a just man, and not wanting to make her a public example, was minded to put her away secretly. But while he thought about these things, behold, and angel of the Lord appeared to him in a dream, saying, "Joseph, Son of David, do not be afraid to take Mary as your wife, for that which is conceived in her is of the Holy Spirit. And she will bring forth a Son, and you shall call His name, Jesus, for He will save His people from their sins."

So this was done that it might be fulfilled which was spoken by the Prophet, saying: "Behold a virgin shall be with child, and bear a Son, and they shall call His name Emanuel, which is translated, God with us."

Then Joseph being aroused from sleep, did as the angel of the Lord commanded him and took to him his wife, and did not know her till she had brought forth her firstborn Son. And called His name, Jesus.

And it came to pass in those days that a decree went out from Caesar Augustus that all the world should be registered. This census first took place while Quirnius was governing Syria. So all went to be registered, everyone to his own city. Joseph also went up out of Galilee, out of the city of Nazareth, into Judea, to the city of David, which is called Bethlehem, because he was of the house and of the lineage of David, to be registered with Mary, his betrothed wife, who was with child. So it was that while they were there, the days were completed for her to be delivered. And she brought forth her firstborn Son, and wrapped Him in swaddling cloths, and laid Him in a manger, because there was no room for them in the inn.

Now after Jesus was born in Bethlehem of Judea on the days of Herod the king, behold, wise men from the East came to Jerusalem, saying, "Where is He who had been born the King of the Jews? For we have seen His star in the East and have come to worship Him."

When Herod the king heard this, he was troubled, and all Jerusalem with him. And when he had gathered together all the chief priests and scribes of the people together, he inquired of them where the Christ was to be born. So the said to him, "In Bethlehem of Judea, for thus it is written by the Prophet: "But you, Bethlehem, in the land of Judah, are not the least among the rulers of Judah; for out of shall come a Ruler who will shepherd My people Israel." Then Herod, when he had secretly called the wise men, determined from them what time the star appeared. And he sent them to Bethlehem and said, "Go and search carefully for the young Child, and when you have found him, bring back word to me, the I may come and worship Him also."

When they heard the king, they departed; and behold the star which they had seen in the East went before them, till it came and stood over where the young Child was. When they saw the star they rejoiced with exceedingly great joy. And when they had come into the manger, they saw the young Child with Mary His mother, and fell down and worshipped Him. And when they had opened their treasures, the presented gifts to Him: gold, frankincense, and myrrh. Then being divinely warned in a dream that they should not return to Herod, the departed for the own country another way.

Now there were in the country, shepherds living out in the fields, keeping watch over their flock by night. And behold, the angel of the Lord stood before them, and the glory of the Lord shone around them and they were greatly afraid. Then the angel said to them, "Do not be afraid, for behold, I bring great tidings of great joy which will be to all people. For there is born to you this day in the city of David a Savior, who is Christ the Lord. And this will be a sign to you: You will find a Babe wrapped in swaddling cloths, lying in a manger." And suddenly there was with the angel a multitude of the host praising God and saying, "Glory to God in the highest, and on earth peace, goodwill toward men!"

So it was, when the angels had gone away from them into heaven, that the shepherds said to one another, "Let us go to Bethlehem and see this thing that has come to pass, which the Lord has made known to us." And they came with haste and found Mary and Joseph, and the Babe lying in the manger. Now when they had seen Him, the made widely known the saying which was told to them concerning the Child. And all those who heard it marveled at those things which were told them by the shepherds. But Mary kept these things and pondered them in her heart. Then the shepherds returned, glorifying and praising God for all the things that they had heard and seen as it was told them.

"For unto us a Child is born, unto us a Son is given,
And the government shall be upon His shoulders.
And His name will be called, Wonderful, Counselor, Mighty God,
Everlasting Father, Prince of Peace.
Of the increase of His government and peace, there will be no end,
Upon the throne of David and over His kingdom,
to order it and establish it with judgment and justice,
from that time forward, even forever."